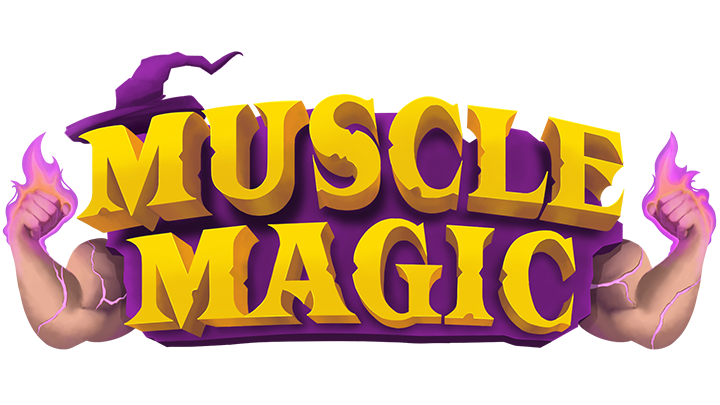 Muscle Magic is a local multiplayer brawler, where up to four players take control over a selection of buff wizards as they launch a barrage of goofy, gym-themed spells at their opponents. The game was created in Unreal Engine 4, and has been released on Steam, next to running on Nintendo Switch at 60 fps.

The game was created as a third-year project within the IGAD course in Breda University, meaning the project went through the full development process over the course of a full school year. I fulfilled the role of Producer in this project, managing a team of 20+ members on my own through the majority of development. As an extension of my production work, I also held QA management and Marketing & Event management responsibilities throughout production and post-production.

Release trailer for Muscle Magic. The full trailer video was created and edited by me. 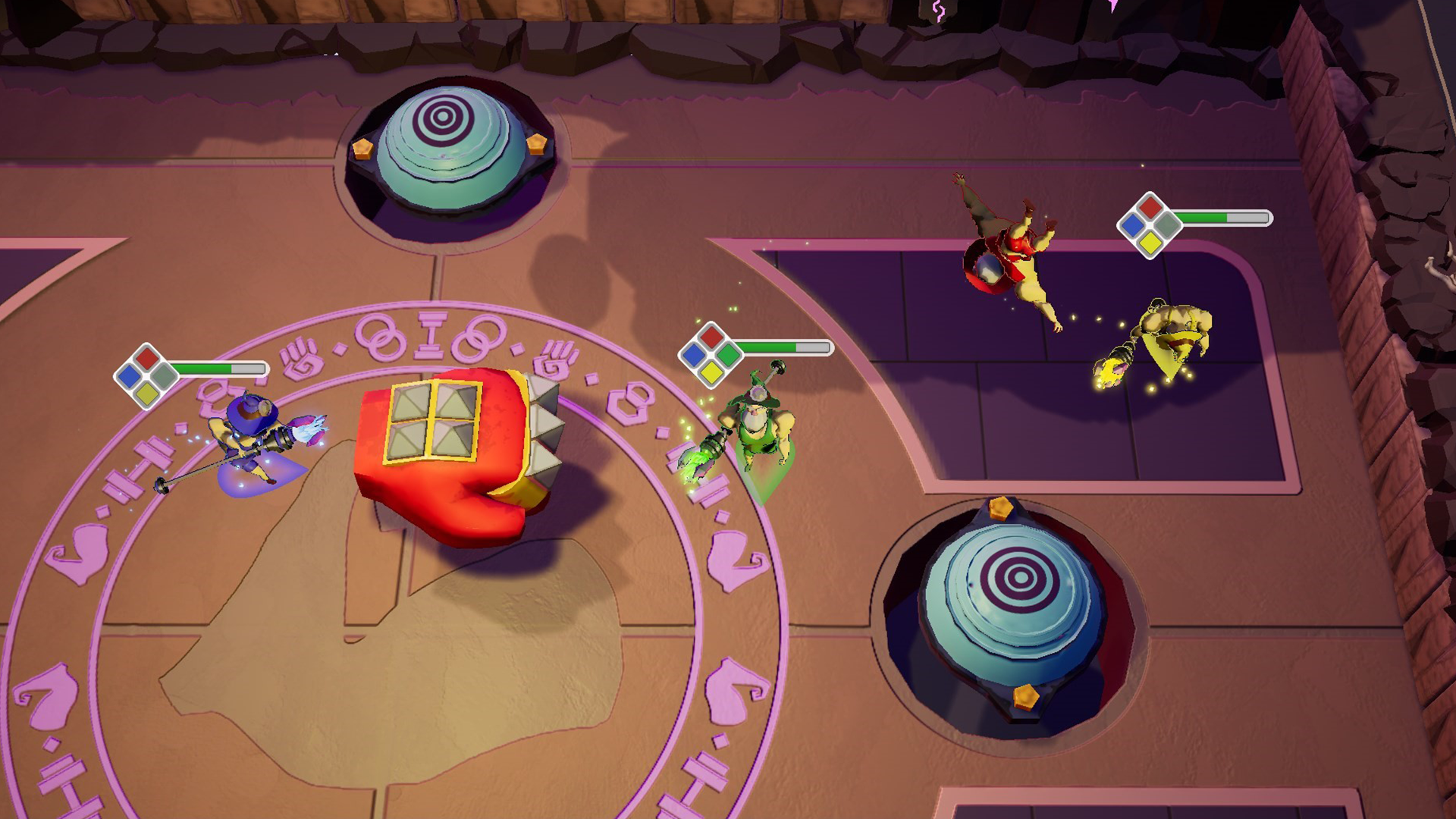 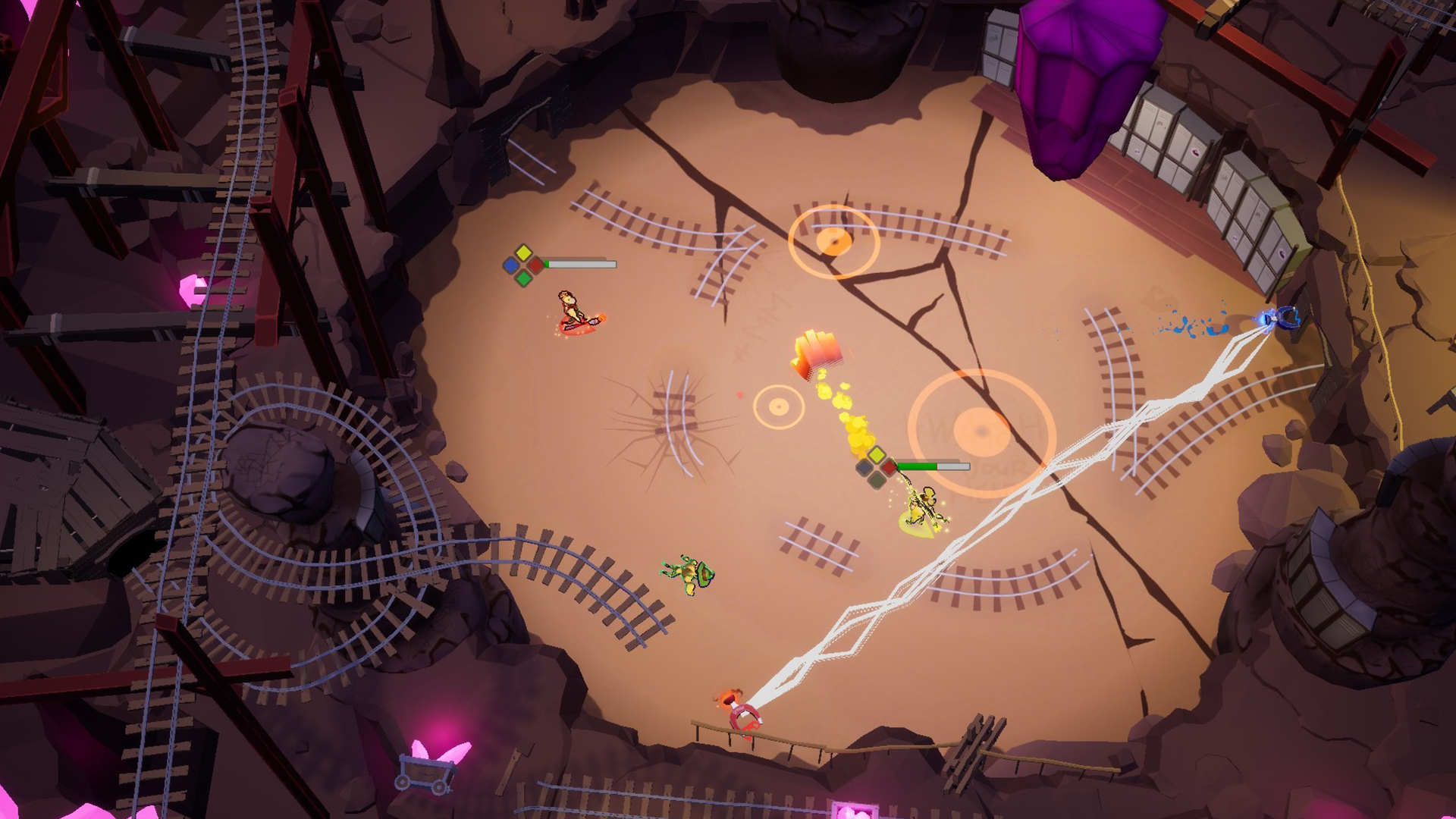 Wide-shot of the Testosterstone level during gameplay. This level shows a combination of asset pack usage for the outer areas, mixed with our own assets for items such as lockers and railroads.

I managed the scope for a large-scale game project with limited resources.

I was responsible for establishing the long term planning for the project, as well as managing the backlog that come from said planning throughout the ongoing development process. This was not an easy feat to accomplish, as we had multiple challenges to overcome with the creation of Muscle Magic. We only had 2 artists working on the project for example, which severly limited our scope. Another issue came in the form of getting the game to run on Switch for both local and LAN play, while also not readily having access to devkits for the majority of development. We managed to find practical and creative solutions to each of our issues - such as the usage of asset packs for parts of the set dressing - and managed to create a project within befitting of stakeholder requirements, without major feature cuts.

I was responsible for digital distribution and marketing of Muscle Magic.

Managing the Steam release of the game was part of my deliverables as a Producer for this project. I did everything from setting up the Steam page, to creating the release trailer, to updating both the page and the game throughout the various updates we launched. Marketing the game was also part of my responsibility, as I continuously sought to engage new and established users through social media and Steam itself. All of these efforts netted us a lot of benefits: Muscle Magic currently holds a positive rating on Steam, having total download numbers that exceed 7000 and having an average page clickthrough rate of 10.8%, far above the usual average of approximately 2%. 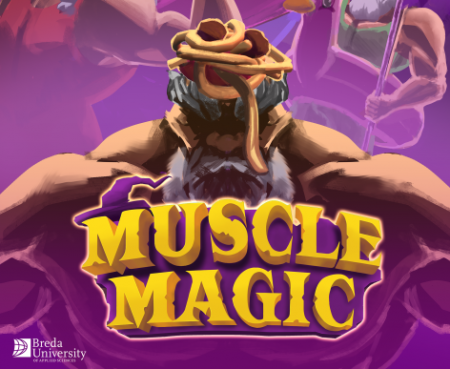 Section of the poster created by Robin Mattheijssen to market the game. 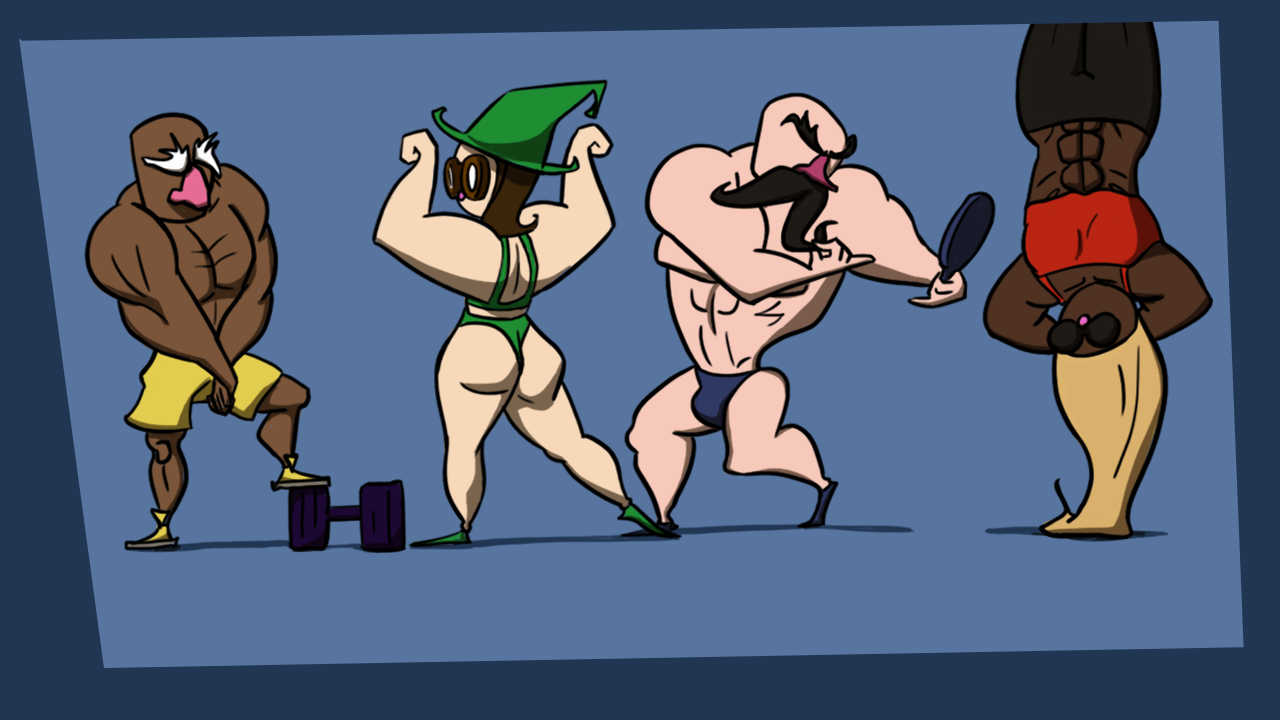 ﻿Across the full extent of the project, I was responsible for maintaining and delivering on the core vision via build quality control and review. In cooperation with each of my discipline leads, I spent a large amount of time on making sure every feature we built enhanced the value of the game and was delivered on time. This task was especially tricky considering the differences between the PC and Switch that we had to take into account, but we managed to establish a quality standard that worked for both platforms without making compromises to the core vision.

Early piece of concept art by Stef van Essen. This piece in particular showcases the wacky tone that was central to our vision from the start of development.

I served as the event manager for the game both before and after the official game release.

I handled both the scheduling and preparation for events at which we could showcase the game, as well as presenting the game myself at said events together with my development team. Through my event management, we ended up getting a booth space at Dutch Comic Con, at the Jaarbeurs in Utrecht. This is something no student game from BUAS had previously achieved, especially one that was still actively in development at the time. We also attended INDIGOx later in the year, for which we were officially selected by Epic Games to be in the Unreal Indie Zone throughout both days of the event. In both events, we noticed a very positive reception from the event attendees: we received a variety of positive feedback from publishers, developers and players alike, and had various groups of visitors making up to 5-6 repeat visits to the booth at both events. 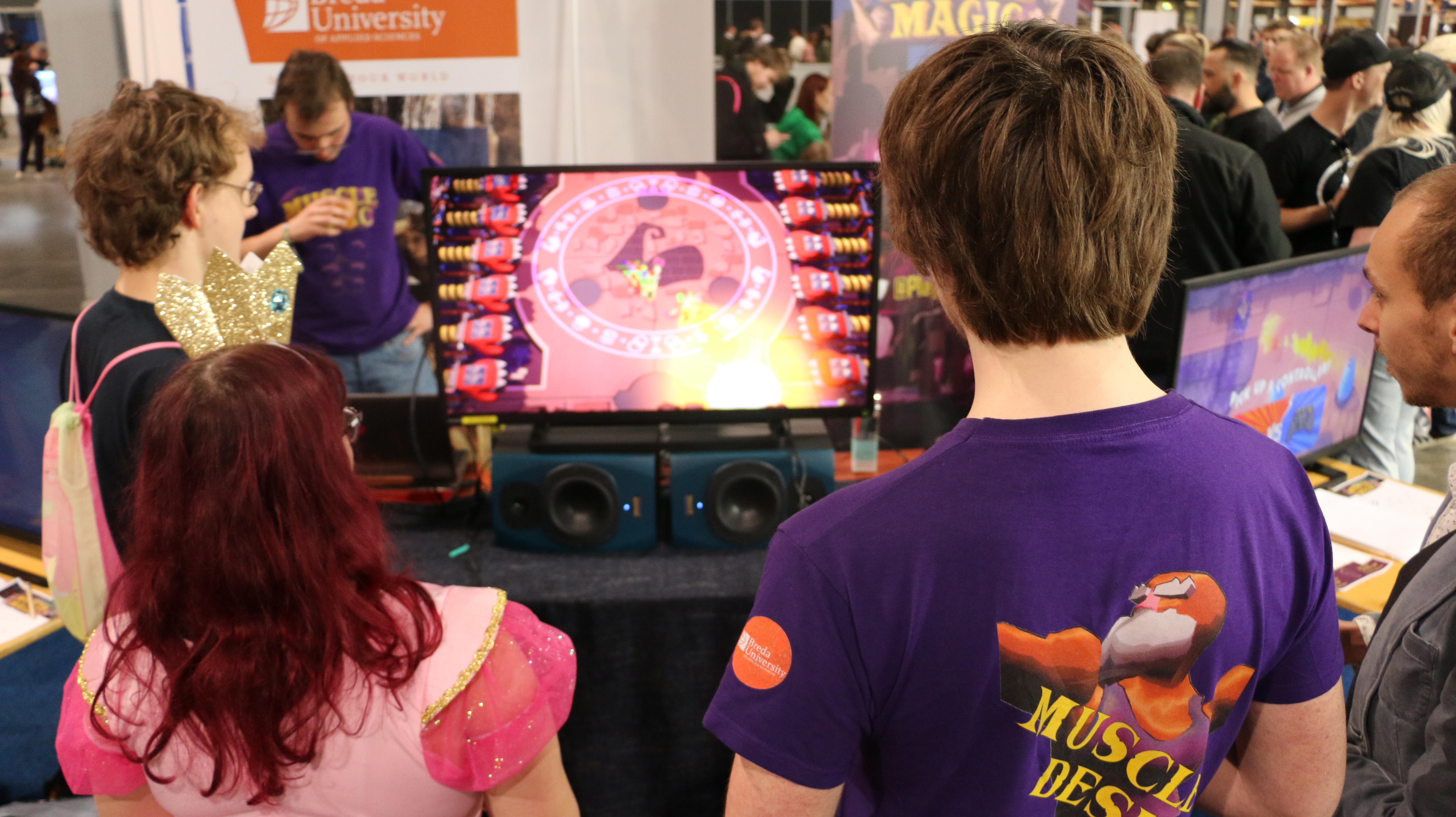 A showcase of our booth space at Dutch Comic Con, with one of the developers showcasing the game to various con attendees. 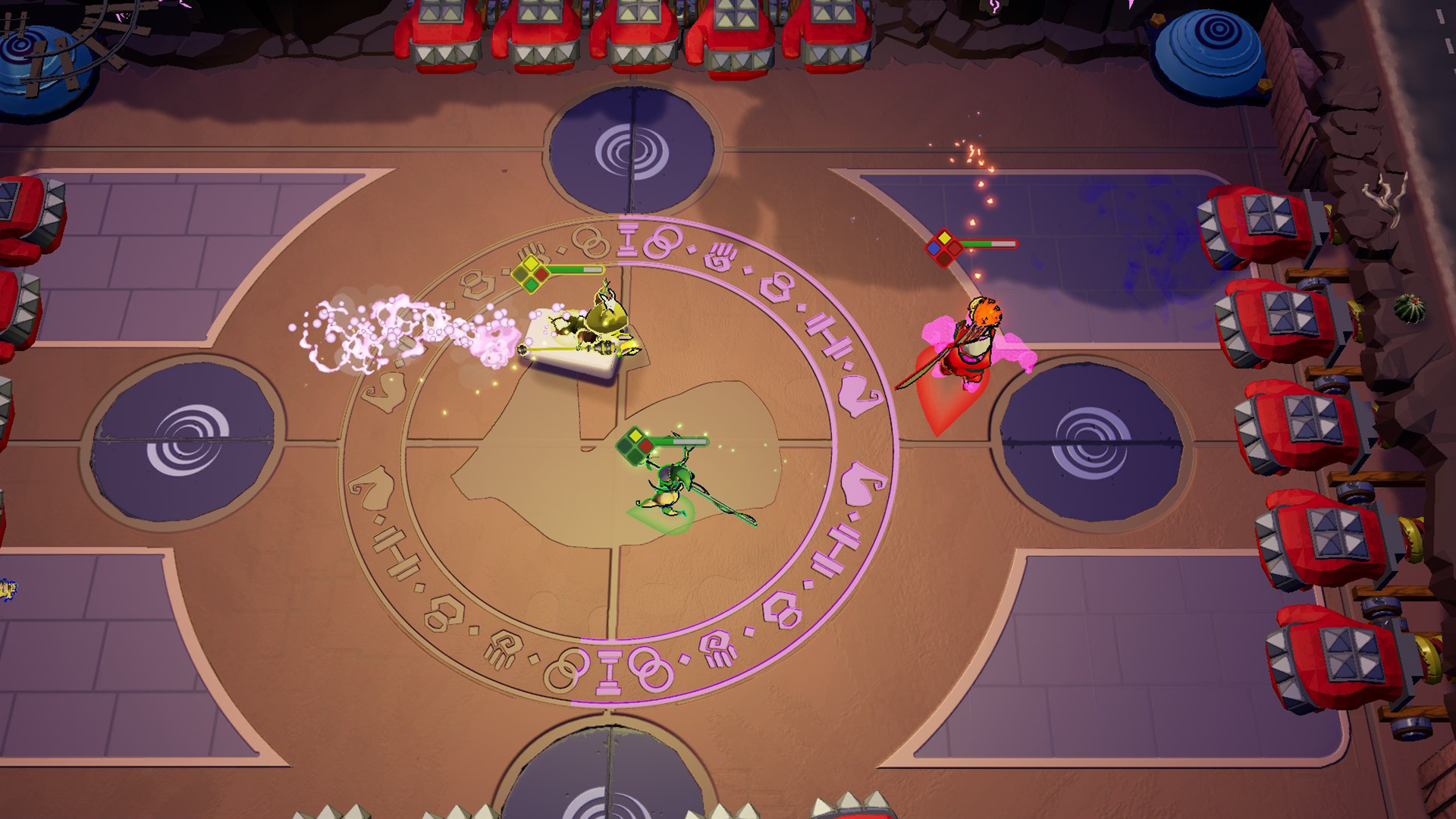 I managed the QA process in a large multi-disciplinary team.

As an extension of my quality control responsibilities, I acted as the QA manager for the majority of development. I kept track over the bug list in Jira, established QA processes for both the leads and team to follow, and delegated bug fixing responsibilities in accordance with the schedule of individual team members and the features they were responsible for. Through me bringing better pipelines and organisation to the QA process, we achieved a global fix rate that exceeded 80%, making the game perform at its best for both of the target platforms.

In-game screenshot of a 3-player match. 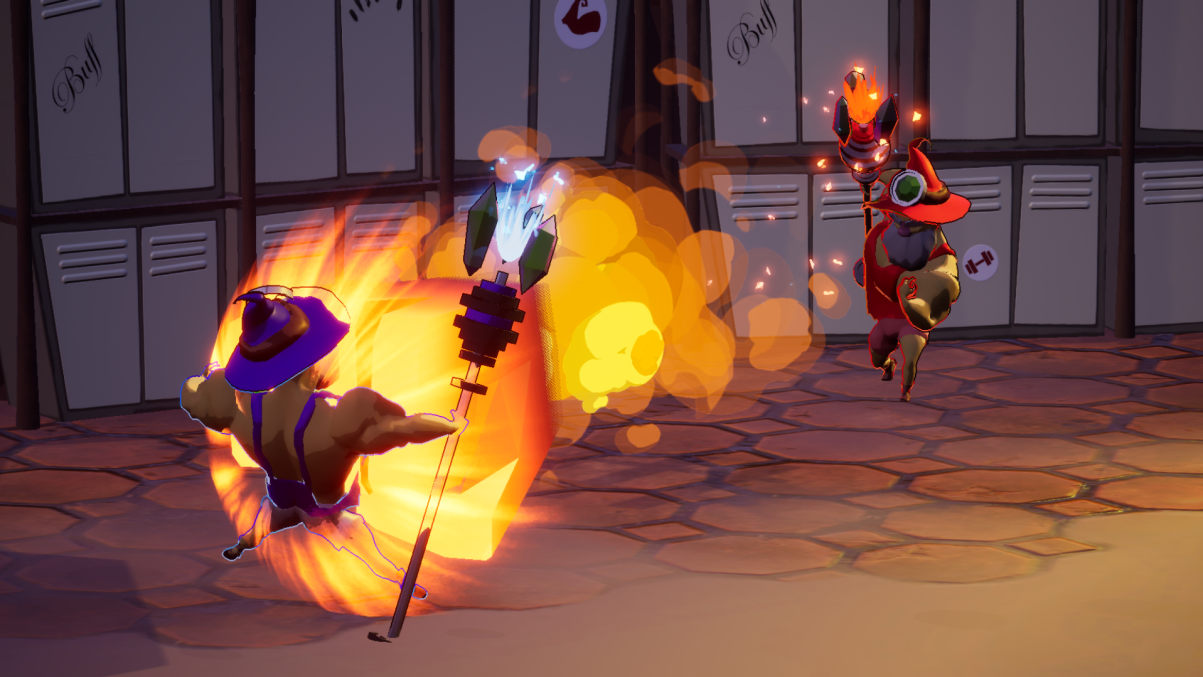 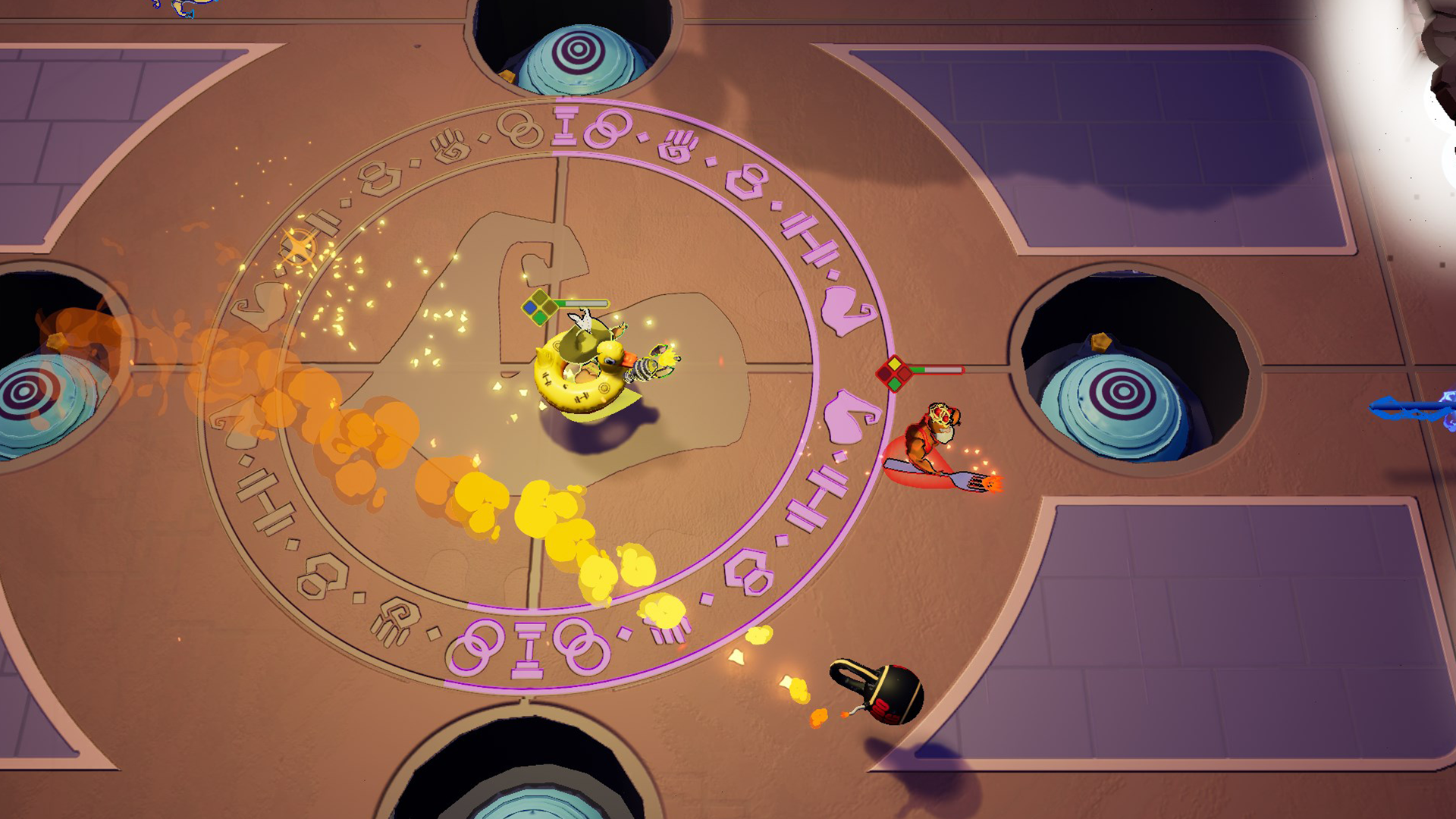 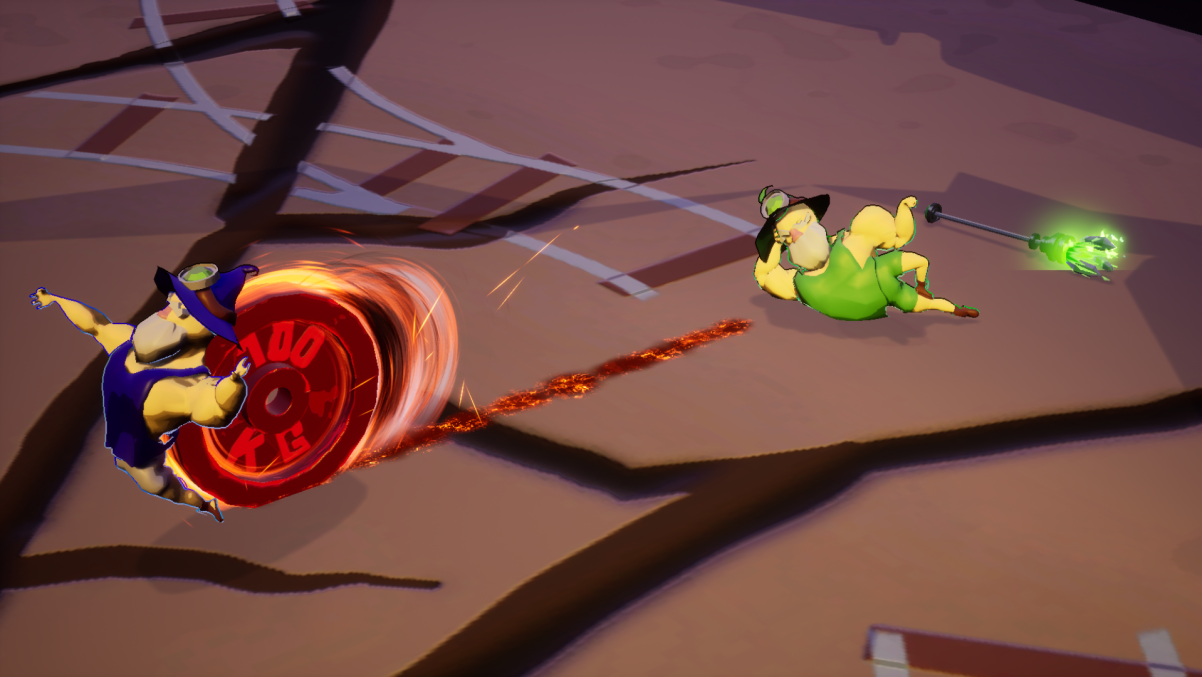 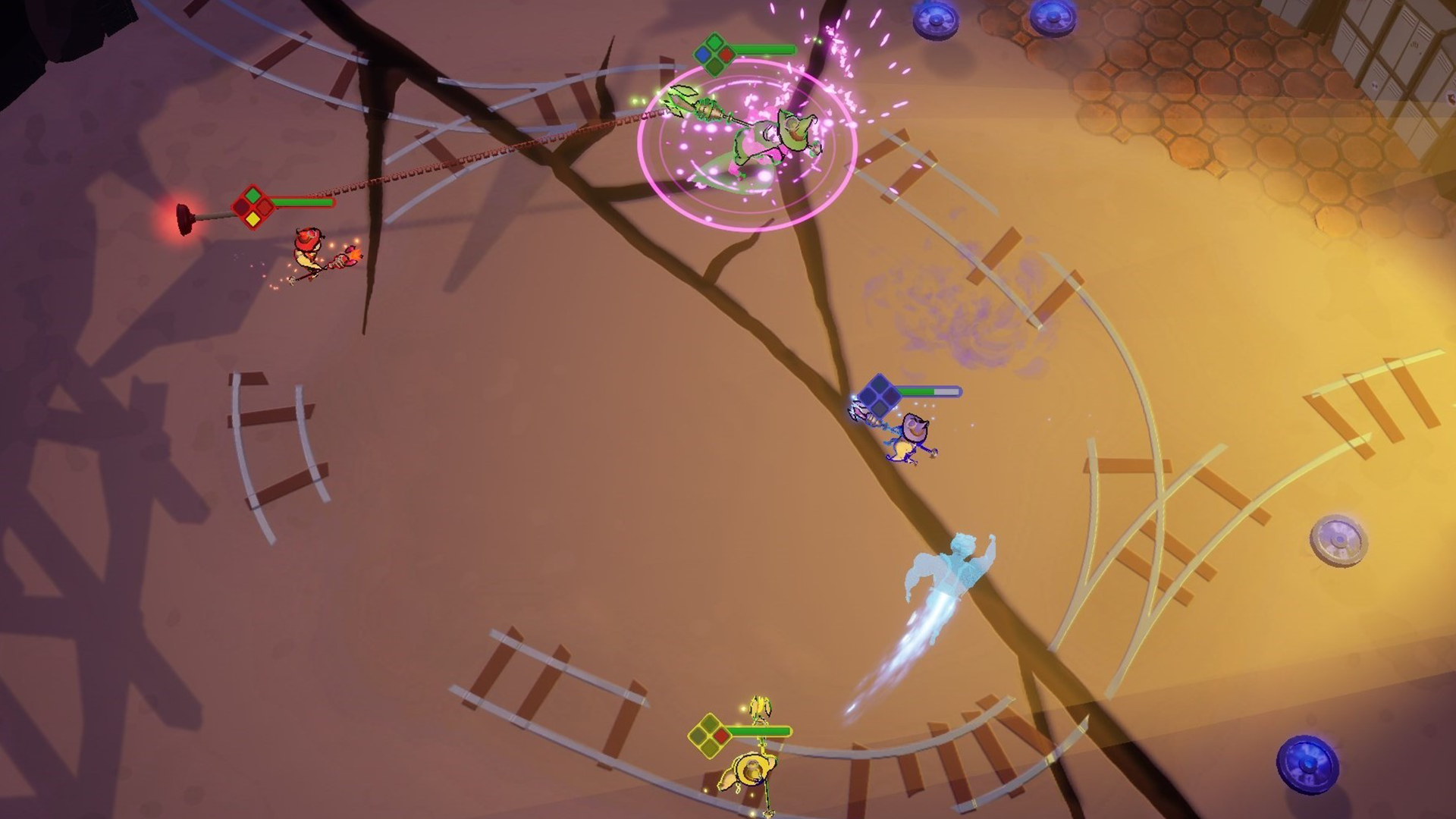 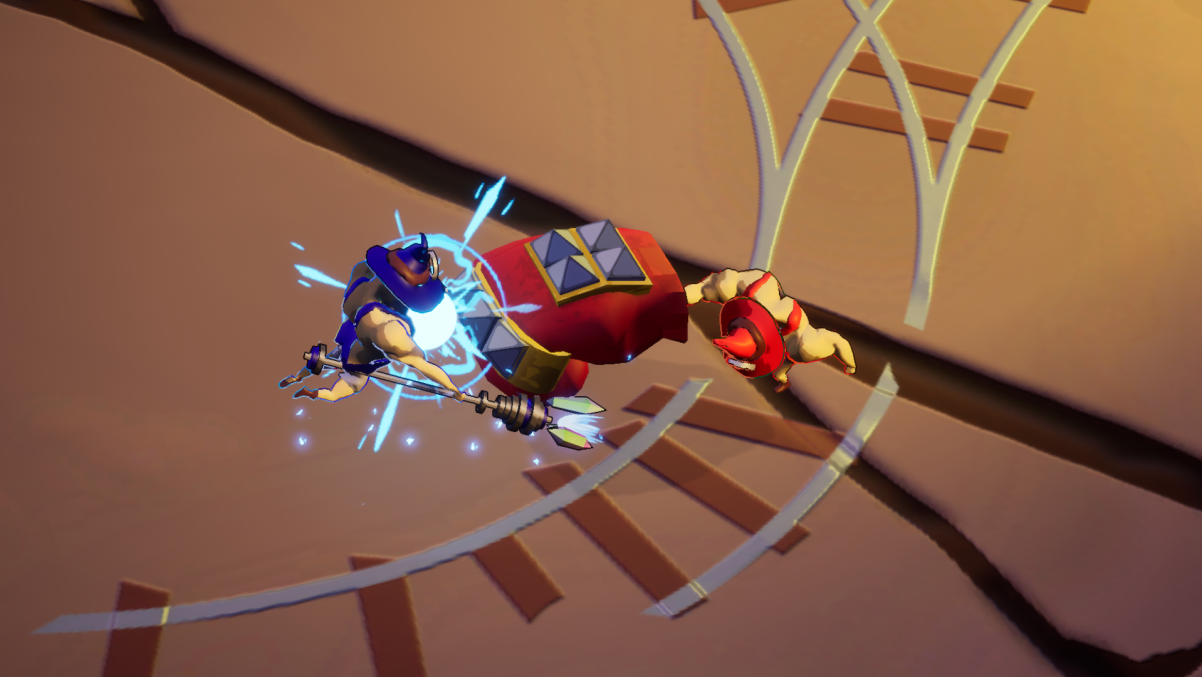 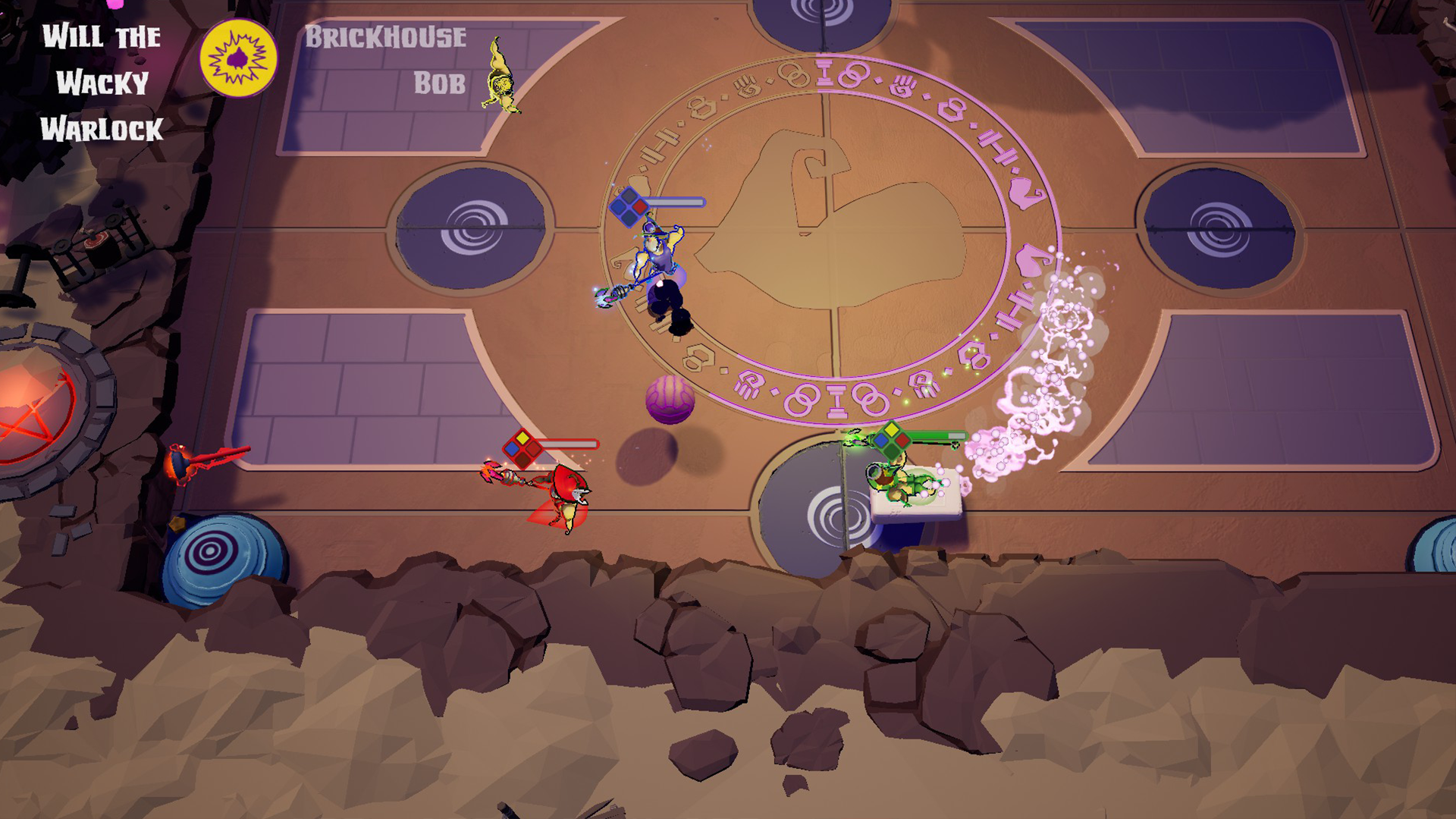